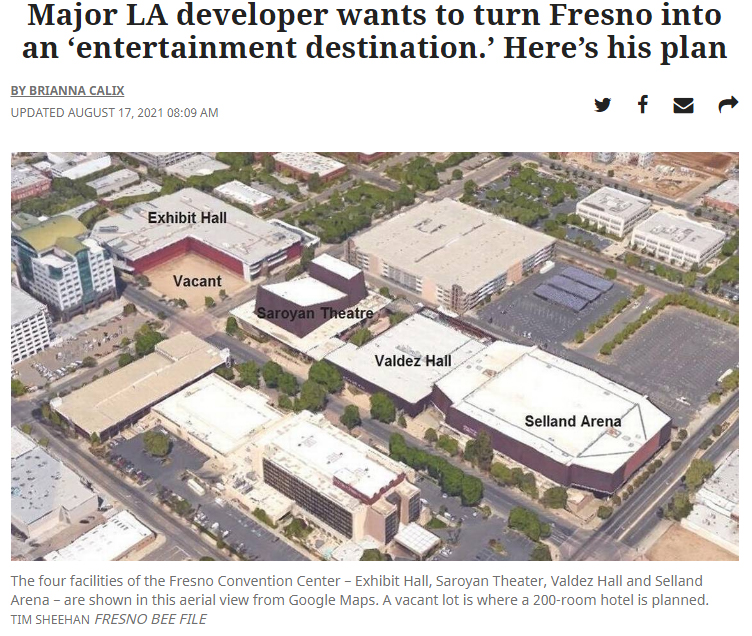 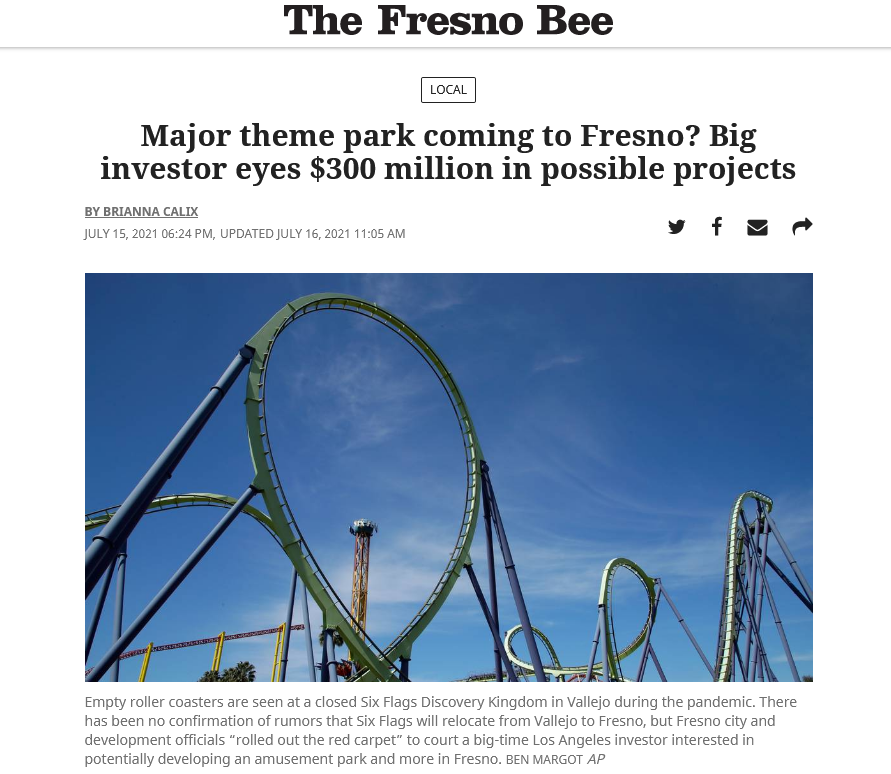 Fresno City Councilmember Miguel Arias confirmed to The Bee that representatives with Sonnenblick Development visited the city earlier this year and made offers to purchase city property and develop other projects in downtown and along Highway 99 in south Fresno.

Arias and Eager said the potential development investment could amount to $300 million and would be one of the single largest investments to diversify Fresno and the Central Valley’s economy in recent history.

“This represents not only an investment of about $300 million but the creation of an industry that has upward mobility, not minimum wage jobs,” Arias said. “It builds on diversifying our economy, where kids in high school can work there and become managers of hotels in the entertainment business. That’s why it’s so huge.”

“The stars are aligning,” Eager said.

Just the first phase of potential projects would create upwards of 6,000 jobs, she said.

While rumors have swirled that Six Flags may relocate from Vallejo to Fresno, neither Arias nor Eager would confirm the amusement park was involved. The Bee reached out to Six Flags, and this story will be updated if there is a response. Sonnenblick declined to comment.

Bob Sonnenblick has an investment profile of $1.5 billion on the West Coast, and his company has led development on Los Angeles government buildings and luxury resorts alike. Sonnenblick has spoken publicly in the past about his work with Six Flags.

Sonnenblick already made an offer to buy the Selland Arena, creating stiff competition for the Fuego Football Club, which also hopes to buy the arena.

“Taxpayers should know that there’s a lot of good competition from people who want to invest in our city,” Arias said. 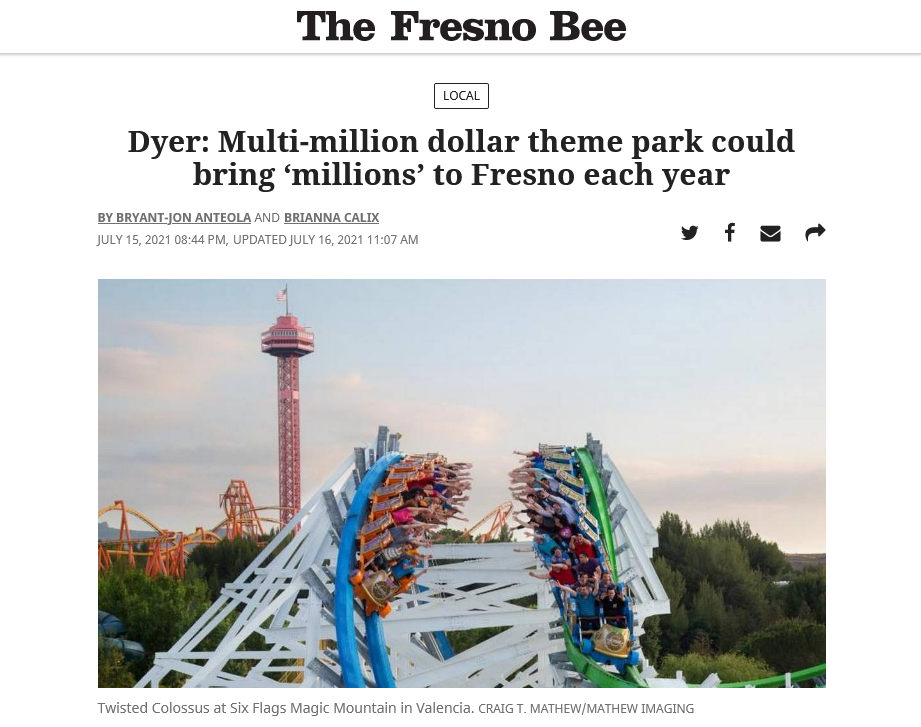 If Fresno does get its own version of a Six Flags Magic Mountain or California’s Great America amusement park, Mayor Jerry Dyer has some locations in mind where the attraction could be placed.

In a message to The Bee discussing the possibility of Fresno partnering to bring aboard a multi-million dollar amusement park, Dyer said the attraction could be built somewhere near Highway 99 or even in downtown Fresno.

Dyer confirmed that he and City Manager Thomas Esqueda have held numerous meetings with Robert Sonnenblick, the principal owner of the Los Angeles-based real estate development firm Sonnenblick Development, and his associates over the past few months.

“We have discussed several entertainment development opportunities near the 99 freeway as well as downtown Fresno,” Dyer said. “Not only have we rolled out the red carpet for Mr. Sonnenblick and those he represents, we have clearly demonstrated that Fresno is poised to serve as the entertainment hub for central California.”

An amusement park, indoor water park, and hotels could all be part of the potential project to make Fresno a central California attraction.

Fresno City Councilmember Miguel Arias and LeeAnn Eager, president and CEO of the Fresno Economic Development Corporation, told The Bee that the potential development investment could amount to $300 million.

Dyer expressed optimism that a multi-million dollar amusement park in Fresno could happen and would be well received by the local community and beyond.

“Although I am prevented legally from discussing the details of the entertainment venue,” Dyer said, “it is safe to say it would attract millions of people annually to Fresno.”

Sonnenblick Development in the News: Is ‘Six Flags Over Fresno’ the Real Deal? Developer Looking for Site

A developer associated with the Six Flags theme park company says he has been scouting Central Valley locations.

Developer Robert Sonnenblick says Six Flags is “looking at sites” in Fresno and Clovis. There have been several meetings with officials from both cities over the past three months.

Sonnenblick’s Los Angeles-based development company is known for building luxury hotels, shopping malls, and office complexes across the country. His company recently expressed interest in purchasing Selland Arena from the city of Fresno.

At a hotel building conference in March, Sonnenblick said his company is developing hotels at Six Flags properties in Los Angeles (Six Flags Magic Mountain is in Valencia), New York/New Jersey and Texas.

Speculation about a possible Fresno Six Flags project has been circulating for months. It was further amplified this week by a posting on a construction bidding website, seeking contractors for a project identified as a Six Flags Over Fresno Amusement Park. Dodge Data & Analytics values the listed project between $25-50 million for pre-design work.

Sonnenblick says the value of the entire project would be much higher.

He says between a hotel, retail space, amusement park and water park, the total investment would be $300 million.

“That would be one of our biggest,” said Lee Ann Eager, president and CEO of the Fresno County Economic Development Corporation.

Sonnenblick would not comment on whether a Fresno-area development would be brand new, or if Six Flags might relocate one of its existing parks. He would not reveal what sites in Fresno/Clovis are being looked at.

“Vallejo and Solano County screwed up that wonderful piece of land. It will sit empty for decades,” Sonnenblick said.

“The City Manager and I have had numerous meetings with Mr. Sonneblick over the past few months and taken several of his associates on a tour of our city,” Dyer said in a statement to the media after initially being coy when asked by GV Wire.

“We have discussed several entertainment development opportunities near the 99 freeway as well as downtown Fresno. Not only have we rolled out the red carpet for Mr. Sonneblick and those he represents, we have clearly demonstrated that Fresno is poised to serve as the entertainment hub for central California. Although I am prevented legally from discussing the details of the entertainment venue, it is safe to say it would attract millions of people annually to Fresno,” Dyer said.

Eager confirmed her agency is working with Sonnenblick. However, she would not confirm their meetings with city officials were related to a Six Flags project.

Officials from Clovis would not confirm meeting with Sonnenblick.

“Any preliminary meetings taking place between the city and potential business ventures are confidential and we can’t comment on them,” said Clovis spokesman Chad McCollum. 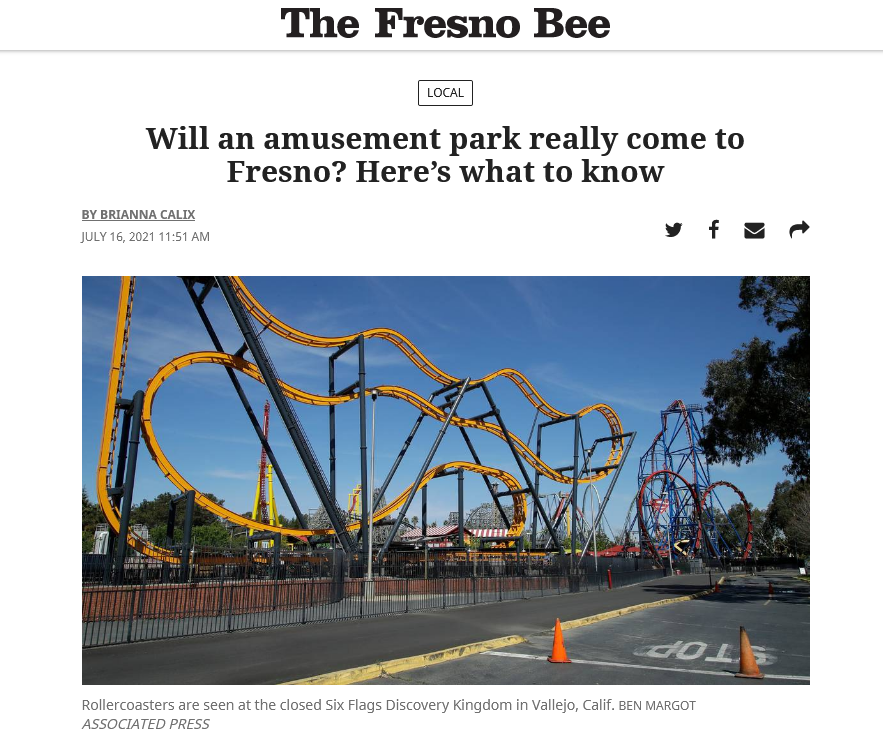 We would like to introduce you to some of our 2021 conference speakers!

**Note: These are only conference moderators. Please visit our website for other speakers 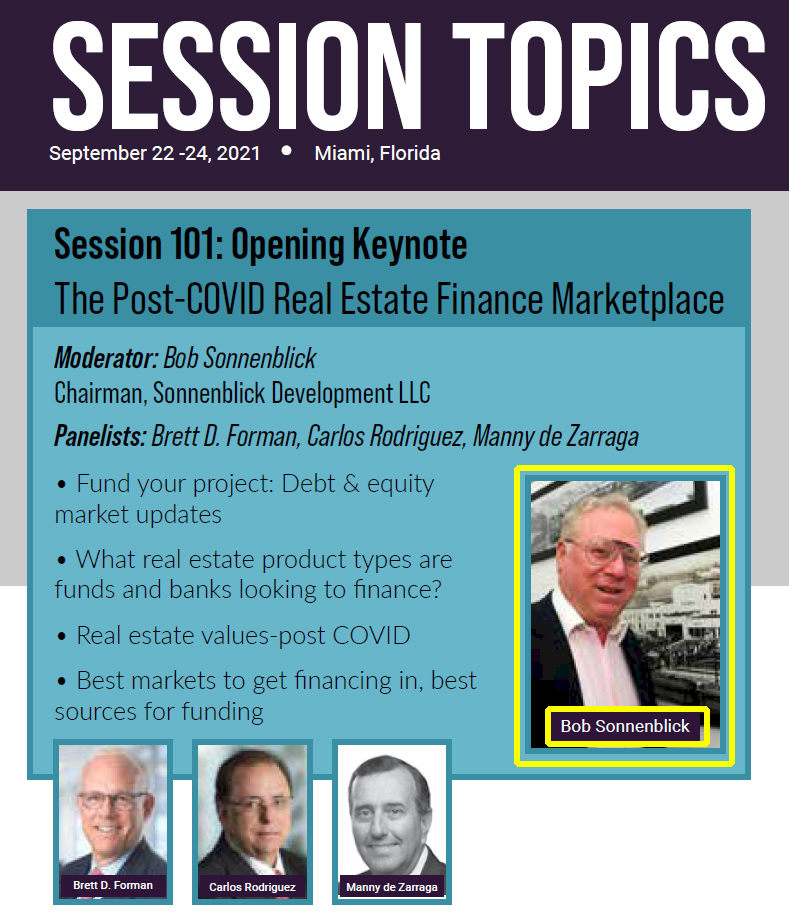 Don’t miss out on these amazing speakers that are guaranteed to give you advanced industry information to help your business prosper and give you the necessary tools to build your company and succeed in today’s ever changing market.

We hope to see you there!

“The Crittenden Real Estate Finance Conference continues to be a fresh and high content event. Format and speakers bring the best of the best.”

“You will learn more about the motivation, focus and risk tolerance of high level decision makers, lenders and investors in 36 hours than any other conference you can attend.”