Editor’s Note: This story is part one of two

With the grand opening of the new civic center and park on Saturday, residents are wondering what will become of the old city hall site.

City Council heard three proposals last week during the afternoon study session on April 23 about how to re-use the land at 3300 Newport Blvd., from RD Olson Development, Sonnenblick Development, The Shopoff Group.

Both Olson and Sonnenblick presented hotels, while Shopoff offered a mixed-use of residential and retail.
Artist renderings of the projects proposed from (top to bottom) RD Olson Development, Sonnenblick Development, The Shopoff Group. 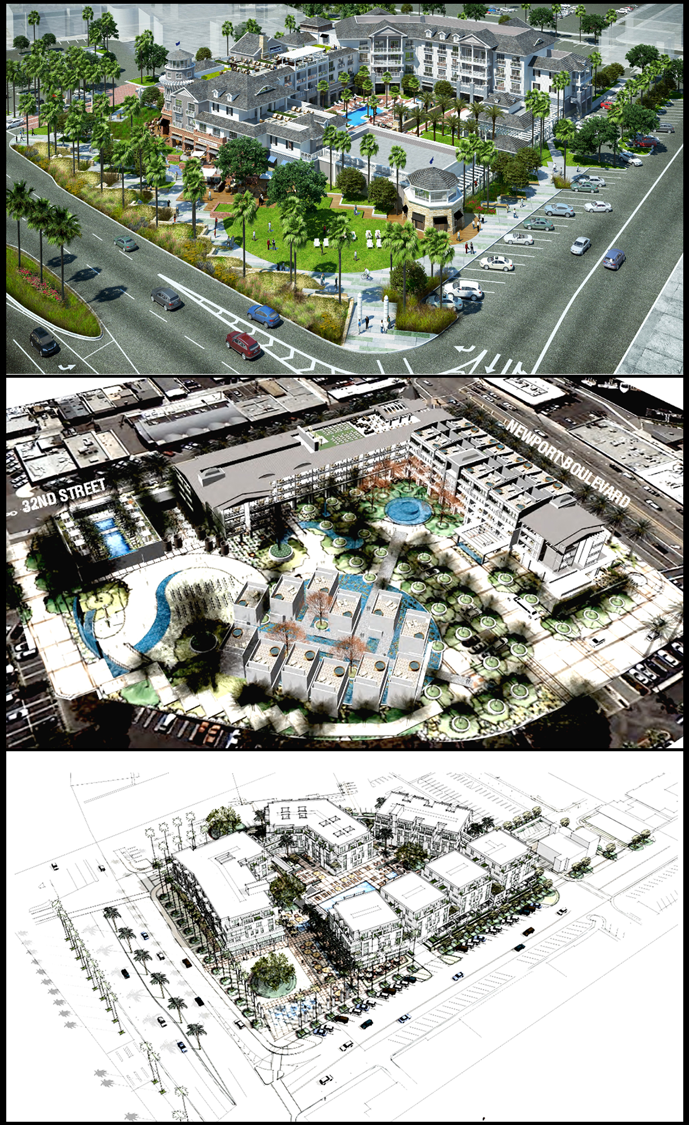 “We all recognize the great need to revitalize Lido Village,” said Lido Isle Community Association spokesman, Hugh Helm, at the meeting, “and the city hall site re-use is the key first step.”

Community response at the meeting was largely in favor of a hotel, with a handful of residents speaking during public comment, including Helm.

A few of the key issues behind the proposals include projected revenue for the city, revitalizing the struggling surrounding retail, how it fits in with the community, financing of the project, economic feasibility, use of the two landmark ficus trees, and parking.

Edward Cook III, longtime Lido resident and co-president of McCarthy Cook & Co., a real estate investment and development firm, has his own take on the issue.

“This is the single most important land use decision on the peninsula,” ever, said Cook, who has taken an interest in the issue both personally and professionally. “It’s a once in a lifetime opportunity.”

“Once we conclude our review, we will present our findings to the City Council in a staff report that will of course be made available to the public. We are hoping to get back to Council in June,” Brandt wrote in an email.

The facility would include a restaurant, spa and fitness center, bay to beach park, ballroom and meeting room, rooftop lounge and viewing deck.

During the next 10 years, the hotel would bring approximately $400 million of direct and indirect spending from hotel guests and about $17 million in taxes to the city, according to Bruce Baltin, senior vice president for PKF Consulting.

Robert Sonnenblick, chairman of Sonnenblick Development LLC, also proposed a hotel during the meeting, his consisting of 20 town homes, 12 villas and guest rooms.

The cost range for the proposal is approximately $70 million, Sonnenblick said later.

The 10-year economic impact would be about $682 million of direct and indirect spending by hotel guests and approximately $1.6 million annually in tax revenue, according Sonnenblick partner, David Rose.

Bottom line is Auberge is a very high end operator, Sonnenblick said, some Auberge resorts have room rates as high as $1000 per night, he explained.

A high-end luxury project creates higher room rates and brings in wealthier customers, he explained, which increases revenue from TOT taxes and guest spending in the local community.

The only mixed-use proposal came from William Shopoff, president and chief executive officer of The Shopoff Group. The Shopoff project would consist of 99 luxury apartment homes and 15,000 square feet of upscale retail space.

The commercial area would include restaurants, community meeting room, pedestrian walkways, water features, a parking garage, and a town square and public plaza.

All three said their project would help revitalize the area.

A hotel would bring visitors to the area, whose number one activity is spending money, Olson said. A hotel will also create activity in town from the residents, he added.

More retail in an area that is already struggling isn’t the solution, Olson continued.

“This is our opportunity to reinvigorate lido and give our city,” Olson said.

A mixed-use space could be as good or better than hotel, Shopoff argued, for a number of reasons.

It would spark economic vitality and redevelopment, he added. The new residents will shop locally, he explained.

Traffic would be lower, especially during special events at a hotel, he added, and the high-end retail and restaurants will add vibrancy to the area, he sad.

In Cook’s opinion, a retail and apartment mixed use project, built in an area already struggling with retail, would contribute very little to economic vibrancy, he said.

“It needs something to jump start (the area and existing retail) not more retail,” Cook said.

“A hotel does so much more for both the city and the local community than an apartment building does,” Sonnenblick said. Financially, a hotel would bring in about 10 times more than an apartment complex, he added.

But it’s not all about economics, Shopoff countered.

It really has to be the best fit for the community and work well with the residents.

After Tuesday’s meeting, Shopoff said it’s clear the public has an opinion on the matter and at the meeting’s public comment, he understands they were overwhelmingly in favor of a hotel.

His project has supporters, Shopoff said, they just didn’t show up.

“It’s our job to try and get (supporters) to show up,” and they should have worked harder on that aspect, he admitted.

He plans on talking more with the community and hopes residents keep an open mind and don’t rush to judgment.

“We’ll provide all the information and the community and decision makers will determine what’s best,” Shopoff said. “We’re going to put our best foot forward, our best project.”

Shopoff said they are honored to be participating in the process.

Some residents that live nearby may fear that with an apartment complex it might get “rowdy” there, Shopoff said, but that is not going to happen, he confirmed.

“It’s incongruent with out tenant profile,” he explained.

The residents will be real contributors to the community, he continued.

Shopoff said at the meeting that he hoped the site will be the “most exclusive rental building in Orange County.”

His project also includes a park with public space. It intermingles better with the community, he added.

“Our project is perfectly designed for both that site and the (local) marketplace,” Sonnenblick said.

Sonnenblick said he is currently gathering endorsements and sitting down with neighborhood groups. He encouraged residents to consider design, economic and feasibility issues, before supporting one proposal over another.

“We are very excited about this opportunity and we think our design could be a very successful hotel,” for the area he added.

Olson, a Newport Beach resident, is working with homeowners and has received a lot of support from the community, he said.

“I think it will give an identity to Lido, the peninsula and the city,” he said.

He emphasized the importance of involving the community and making sure residents feel that it’s their hotel. His project is designed to get guests out and into the community, rather than capturing them and keeping them on the property, he explained. They have one restaurant, but would encourage guest to eat out at local restaurants as well. He didn’t want to compete with the local restaurants, he added.

The restaurant will be WK Grill, created in honor of W. K. Parkinson, who dredged the harbor and built the isle up to 10 feet above the high tide line. He built Lido Isle.

“He was an oil man with a colorful past,” Olson said. So the restaurant will be themed around the life of W.K.

This is an urban area and not a large piece of land, Olson said, so his team wanted to create a hotel appropriate for the setting. It’s not a big resort environment, he added.

“That’s the wrong concept for Newport Beach,” he said. “It wouldn’t work in this community.”

The three developers have also contacted the owners of several neighboring sites, including Lindsay Parton, President/Principal of DJM Capital Partners, the firm about to seal the deal for Lido Marina Village.

“Revitalizing Lido Marina Village is an exciting opportunity, to say the least. It’s not often you have such a picturesque and even iconic place with all the important elements already there,” Parton wrote in an email.

He endorsed RD Olson Development out of the three, he said.

“The architecture ties in with the history of the area and will provide an authentic lodging experience for visitors to Lido Village and Newport Beach alike,” Parton continued.

The two companies recently worked together on a project in Huntington Beach.

“Our challenge is to bring it to life with some fresh thinking, creativity and a lot of TLC. Quality boutiques, innovative restaurants, and a great ambience and style -that’s something we know how to do. But getting it just right for the locals – that’s something we take pretty seriously,” Parton wrote.

The Fritz Duda Company, owner of the neighboring site, Via Lido Plaza, declined to comment on the three potential developers, said property manager Tristan Ritter. They may comment at a later time as things progress, she added.

The second half of this story will appear next week and cover the financing aspect of each project, economic feasibility, the two ficus trees, and parking.

Editor’s Note: This story is part one of two