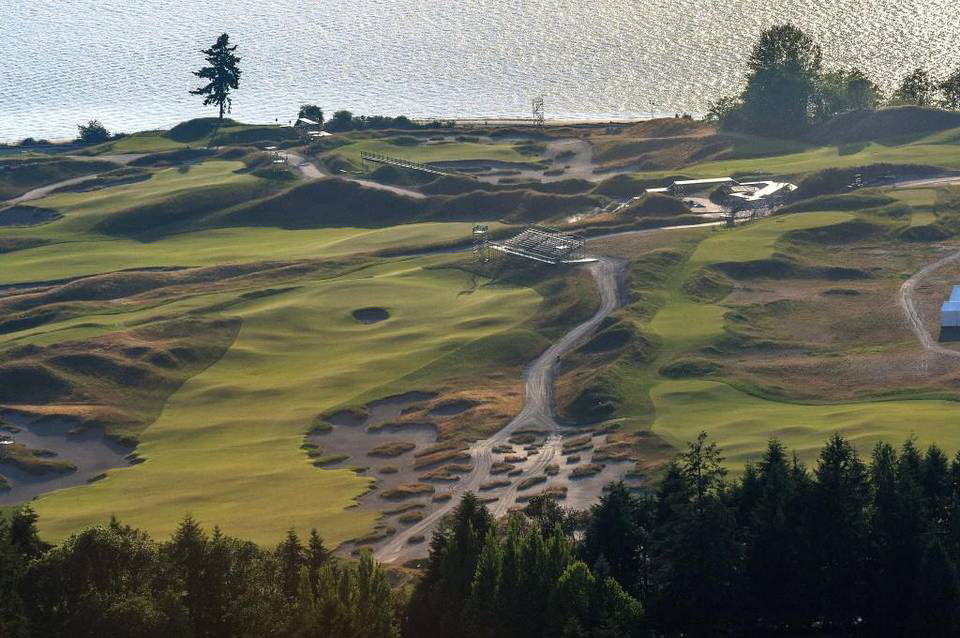 The now legendary lone fir stands out amid the rolling landscape of the links style golf course at Chambers Bay. An 18-hole golf course and a large resort-hotel are no longer planned for Chambers Bay in University Place. Instead, Pierce County officials have asked the California developer behind the project for a smaller development. Dean J. Koepfler Staff file

An 18-hole golf course and a large resort-hotel are no longer planned for Chambers Bay in University Place.

Instead, Pierce County officials have asked the California developer behind the project for a smaller development.

“We didn’t feel from a county perspective that it was realistic to have a development predicated on the building of a new golf course,” deputy county executive Kevin Phelps said last week.

The county’s request came after the U.S. Open in June.

The course was planned for directly south of the Chambers Bay golf course with Chambers Creek Regional Park as a buffer. The hotel was proposed off Grandview Drive, near the entrance to the park.

“We feel that even though we could technically squeeze another 18 holes in, it might make it so we’re not competitive for a future (golf) event,” Phelps said.

Sonnenblick, who owns Sonnenblick Development, is working on a new proposal.

“We understand the county’s reason for this decision, and we have no problem with it,” Sonnenblick wrote in an email to The News Tribune last week.

Losing the golf course means a smaller hotel, he said.

“Clearly without the second ‘resort’ (golf) course we would no longer be able to justify building a large, 300-plus room resort hotel in one big phase,” Sonnenblick wrote.

Plans included a 258-room hotel, conference center, 180-seat cafe and restaurant, and a swimming pool. The conference center was proposed for what now is the county’s environmental services building, with a ballroom added on.

“We have redone our feasibility studies and appraisals to divide this hotel development into two phases,” Sonnenblick wrote, “the first of which will be approximately half the size of what we had planned before.”

Sonnenblick expects to have new project renderings to the County Council soon.

“We are very excited about how the new, smaller, hotel layout sits (on) the land parcel and how well it works with the site’s current long-term master plan,” he said.

The county’s decision to request a scaled-back development was “partially economic and partially making sure that we have the ability to use that property for a variety of uses,” Phelps said.

After seeing architectural drawings for the hotel a year ago, at least two County Council members cited concern with impeding the public’s ability to access the site.

Public amenities include trails, parks and playground as well as the golf course.

“That is the public’s property,” Councilwoman Connie Ladenburg said at the time. “To make sure that (residents) still feel that that’s their property, I think, is very key with any development that we do out there.”

Sonnenblick maintains he will develop a project that promotes pedestrian accessibility to the site.