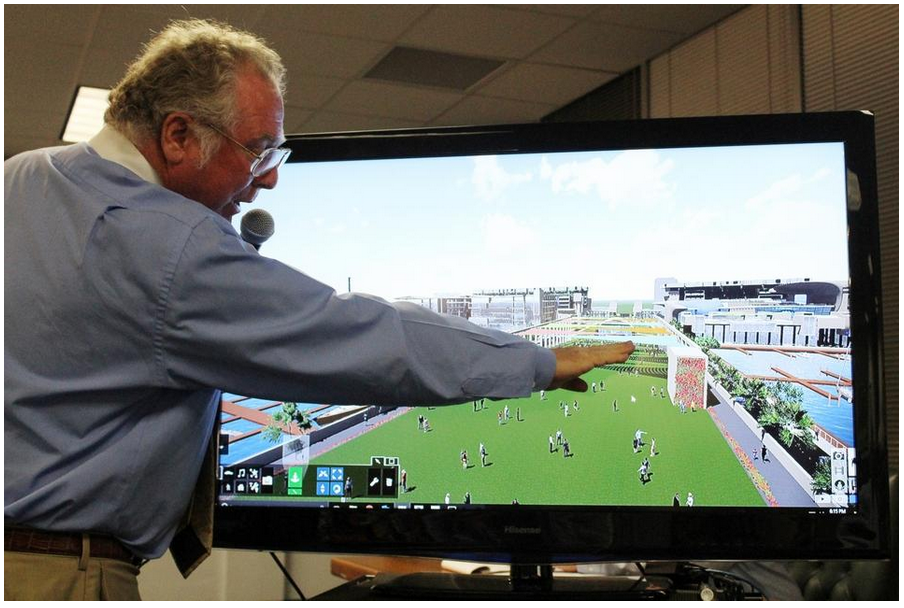 Saying he “would not leave” without answering everyone’s questions, Sonnenblick, along with his partners at Bellingham Marine, Florida Architects and GAC Construction held the floor for more than two hours, fielding questions, comments and concerns from the public, mainly focused on the boat ramp and potential parking.

It was the first time the developer has been in town since reviewing public comments regarding the project forwarded by the city. Many of those comments expressed concern that the project was becoming overcrowded and some residents were upset at the recent addition of outlet stores around the Marina Civic Center, particularly because they block access to the boat ramp.

“We will not build this project without boat ramps … and parking,” Sonnenblick told the audience, adding that the boat ramp, which he proposes to double in size, likely will be moved to the other side of the marina along East Beach Drive.

Also featuring heavily in the plans presented Tuesday were a pair of high-rise residential towers on property owned by George Kingston, who Sonnenblick referred to as a “partner.” The plans call for the relocation of East Beach Drive to accommodate the condos and a white sand beach across the road.

“This is going to be an amazing beach,” Sonnenblick said.

With the addition of the residential towers, Sonnenblick hinted a grocery store might be back on the table for the downtown area, declining to state names, but saying it was an entity which had an agreement several years ago that fell apart.

Tuesday’s meeting also saw the debut of Bellingham Marine, Sonnenblick’s replacement for Legendary Marine, to answer questions regarding the actual marina function of the project. Manager of Project Development Steve Ryder said the new marina will have 236 slips and accommodate boats up to 200 feet long.

Sonnenblick also promised to keep a fishing pier, as well as a lighthouse, which in models shown during the meeting was more of a glass tower-type structure with a stairway and observation deck. Parking would be confined to garages flanking Harrison Avenue on either side of the marina’s entrance, as well as under a sloped esplanade running down the middle of the marina where the marina’s green space currently is located. The 9/11 memorial also would be moved, likely in front of the Civic Center.

Sonnenblick said the price tag on the project will be close to $300 million and construction will take two years. The developer said phased construction “wouldn’t work” and would be done all at once.

Above all, Sonnenblick emphasized nothing is set in stone with regards to the marina, especially because the city has not officially selected him as the project’s developer. His exclusive negotiating agreement with the city expires in May and will need to be extended, he said, for him to be able to conduct the feasibility studies he needs to move forward.

“We’ve redesigned the marina,” he said. “It will work now. It will be a working marina that will last 30 years.”

Residents were skeptical but encouraging during public comment, with many expressing hesitancy about the scale of the project, but wishing Sonnenblick luck.

A date has not been set for the next meeting.