30-Acre RFP Down to the Wire

Sonnenblick Development’s Bob Sonnenblick is keeping his fingers crossed—and not just for while zip-lining through the rainforest in Costa Rica. Bob tells us he’s waiting to see who is picked to redevelop the Ports O’Call Village in San Pedro. (The final decision is due in one week.) 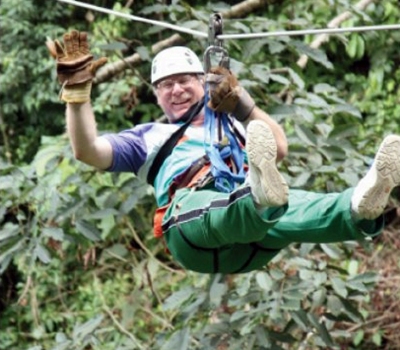 The City of LA’s RFP will see the 50-year-old complex bulldozed and replaced with a brand new restaurant and retail project on a 30-acre waterfront site. Bob, a panelist at tomorrow’s Bisnow Hotel Investment Summit at the SLS Hotel in Beverly Hills, also tells us the company won an RFP to build a Marriott and a Hyatt Place hotel (335 rooms total) that will be attached to Sacramento International Airport’s new $500M Terminal B. In addition, Sonnenblick plans to begin during 2013 on a 330-room hotel in Cathedral City and has resort hotel projects in the works in the Bahamas and Palm Beach, Fla. Bob just started planning his annual Super Bowl Party for his RE industry friends. The only thing that could cancel the party “is if the Jets go to the Super Bowl,” because in this admittedly unlikely event, the diehard fan plans to be right there cheering them on.